Well it has been 5 weeks since I arrived back to Uppsala after the training camp in Croatia and Slovenia. It has been a stable period of training and working, with two significant highlights being victories in Måsentafetten and Kolmårdskavlen with Ok Linné. These relays are pretty insignificant in the scheme of things, but despite this, there is significant excitement and energy surrounding them.

I ran first leg, followed by Rassmus, Albin and then Oskar. Linné won this relay last year, so there was a little pressure/expectation to repeat the effort. There was some stress in the beginning for me trying to find where to get into the start. Evidently the mass of people congregating was not clear enough. This stress was quickly replaced with focus, and I got into my rhythm once the start gun was fired. I had full control over the technique up to the 7th control. Towards the 8th I made a small mistake, where the group got ahead of me. I think here the tough swedish terrain caught up with me at this point also, and I became tired. It wasnt too far to the finish, so I managed to finish in 6th position on the first leg, just under 20 seconds down. The business was already done, with Rassmus, Albin and Oskar taking over and finishing off the relay in style. 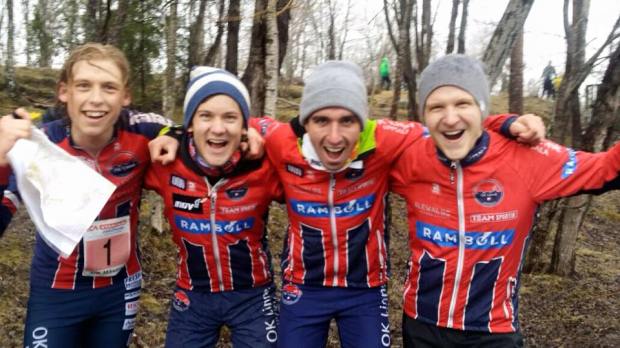 A week later, a small team change with Oskar pursuing romance over glory, and it was another victory. This time Kolmårdskavlen, with Jakob running the first, me the second, Jan 3rd, Rassmus 4th and Albin running the anchor leg. Jakob had a stable run sending me out in 18th position. I could then “hunt” the pack down, and eventually caught the front group just before the finish. I was really happy with my race apart from one 20 second mistake to the 5th control. It was even nicer to have the feeling to catch the first group, so that I could give Jan a good position for him to go out in. Then again, Rassmus and Albin were better than the rest, and Linné took the top place on the podium. It was actually pretty close in the end with SNO, so it was even nicer to finish on top.

Map
Video of the finish

Running into the finish (photo by JB)

Run in with the team! Vad kul! (photo by JB)

The spring weather is starting to arrive now, and following day light savings last weekend, training conditions are becoming increasingly more pleasant here in Uppsala. I ran one of the coolest trainings ever last weekend, a leg over 3km with contours only in Lunsen set by Thierry. An awesome challenge!

Tomorrow I shall run my final relay before Tiomila, Rånässtafetten, and I will run the 4th leg. We have two very strong teams, so it will be fun to see which of the two teams comes out on top. Our goal for this relay is to demonstrate the strength of our team for Tiomila. The feeling in the mens team is really great at the moment, everyone seems to be in rather good shape so we are getting very excited (even #ogdenexcited) for Tiomila. Then, it is under a month to Tiomila, and my first major goal for the season.